Back to Back Theatre creates new forms of contemporary performance developed by an ensemble of actors with a disability, giving voice to social and political issues that speak to all people. Based in the regional centre of Geelong, the company is one of Australia’s most globally recognised and respected contemporary theatre companies. www.backtobacktheatre.com

Since 1999, under the Artistic Directorship of Bruce Gladwin, the company has nurtured a distinctive artistic voice. Back to Back Theatre has received 17 national and international awards including in recent years Performance Studies International’s Artist-Scholar-Activist Award, a Helpmann Award for Best Australian Work, an Edinburgh International Festival Herald Angel Critics’ Award, a New York Bessie and the Myer Foundation Group Award for longstanding contribution to the development of Australian theatre. In 2015, Bruce Gladwin received the Australia Council for the Arts’ Inaugural Award for Outstanding Achievement in Theatre. 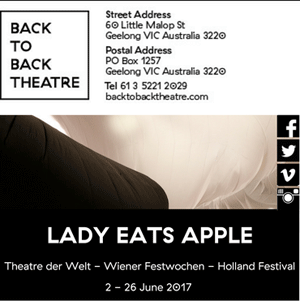