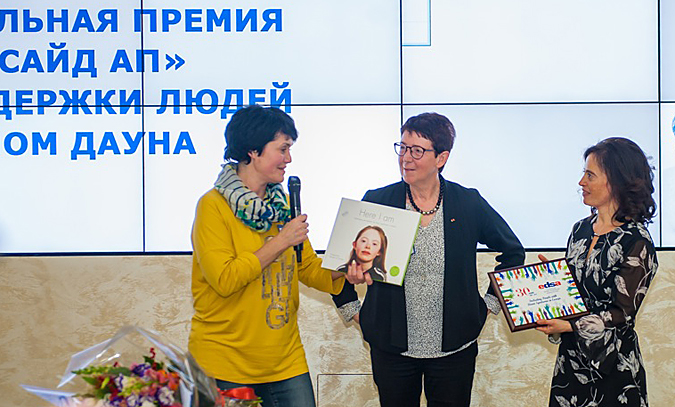 20 years celebration of Downside Up

– December 1./2. 2017 the Russian member of EDSA, Downside Up, celebrated their 20th anniversary with a very well attended national conference in Moscow, Russia.

Through the “Invite an expert”-project of EDSA, Cora Halder was invited to speak at this conference about the topic school-inclusion. EDSAs vice-president Tania Michalenko travelled from Ukraine to participate in the conference as well.

During the award-ceremony in Moscow Tania and Cora had the opportunity to present the EDSA- celebration-plaque to Anna Portugalova, the director of Downside Up. This plaque was designed for the 30th anniversary of EDSA and presented to its members at the annual meeting in Dublin in the beginning of November. As our Russian members could not participate in Dublin, the conference in Moscow provided a good opportunity to hand over the EDSA-plaque. A copy of the Irish book “Here I am” was also presented to Anna.