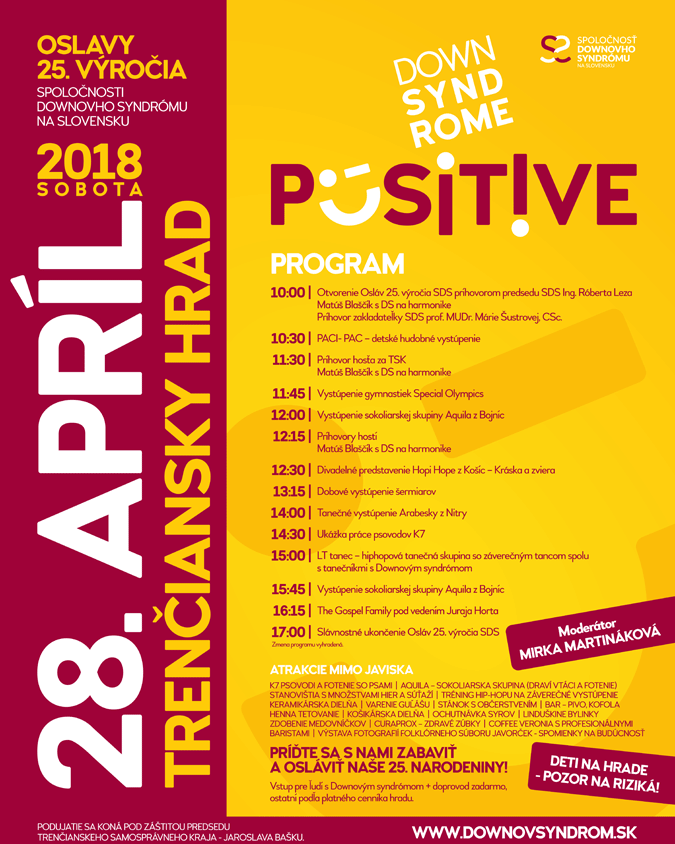 The Slovakian Down Syndrome Association celebrated their 25th anniversary on 28th April 2018 on the Castle of Trencin in central Slovakia.

It was a big family-get-together with a lot of activities especial for the children with Down-Syndrome and their brothers and sisters. The beautiful weather and the wonderful location, high up on the castle with wide views over the country, made it to a very special event.

The opening-speech was held by Robert Lezo, the president of the Association. Prof. Maria Sustrova, who was the founder of the Ass. gave an overview of what has been done and changed during those 25 years.

Invited was a team from the Czech DS Association from Prague: president Prof. Dagmar Dzurova and the board members among them Isidro Moyano (who is also in the EDSA board). Cora Halder was invited as EDSA representative. Family Engels from the Netherlands, who has contact to both the Czech and the Slovakian DS associations were also present.

The Slovakian DS Association was one of the first members of EDSA. Especially Prof. Maria Sustrova, as a physician and scientist has been an active supporter in the early EDSA years. Prof. Sustrova (Clinical Immunology and Allergology) is an expert in the DS-health-field. Since nearly 30 years she leads a DS-Ambulance at the Slovakian Medical University in Bratislava and has seen and treated hundreds of children and adults with Down Syndrome from Slovakia as well as from the Czech Republik, and Austria.

Photos of the anniversary can be viewed here: https://downovsyndrom.sk/v16/node/401