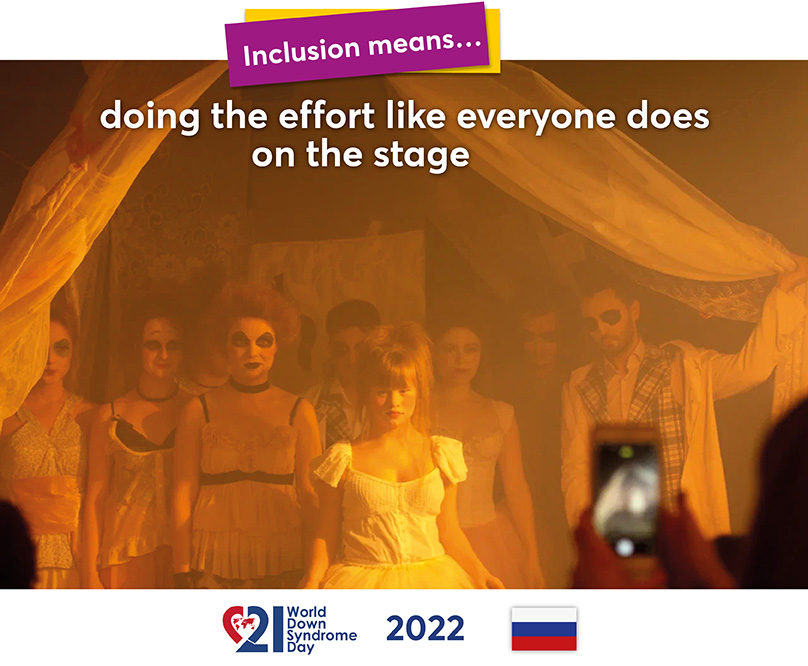 Marina Mashtakova is a 19-years old girl from Moscow. She is an actress in Urban Forest Echo theater, she studies in college to become a tailoress and works in designer clothes and accessories shop. She also has Down syndrome, so she has been involved in Downside Up programmes.

The photo shows Marina on the stage during “Uncle Vanya” by A.Tchekhov performance. Marina is the only not professional actor in the theatre troupe. She was invited to the theater not because of Down syndrome, but thanks to her talent. The stage director, Anna Demidova, in her interview says that she was attracted to Marina as to the actress who works hard during rehearsals, thinks deeply about her character, professionally acts on stage. Anna outlines that for her, theater means co-creation and Marina is the person with whom it is interesting to dive into creativity and to work with.
Marina’s thing is super-heartiness. She is very real and sincere on stage and that creates amazing magic.

When Marina joined the troupe, she fitted in quickly. At the same time, as she joined a modern physical theater, she had to work a lot on movements, dances which was hard. But Marina was very enthusiastic and did great. She has an immense love for the stage and is eager to work a lot which inspires respect from the other actors.