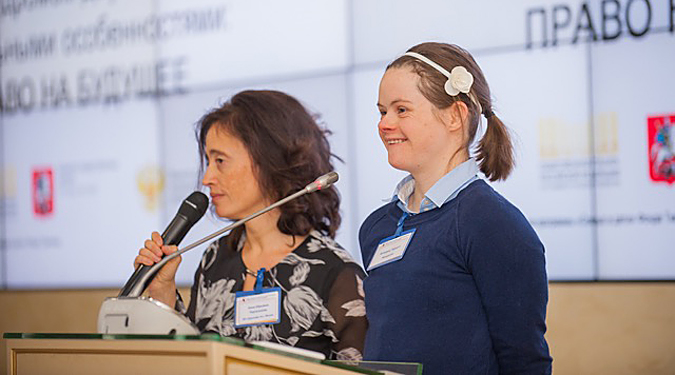 Over 300 participants from 60 Russian cities came to inform themselves in numerous lectures and workshops and to exchange experiences and good practices.

On Friday 1st December the conference was opened by Anna Portugalova, director of Downside Up and Florence Garrett, a young woman with DS (see picture at the top). Aleksander Borovykh, the strategy director of the Charitable Fund give an overview of the situation of people with DS in Russia.

In the following panel ten different short lectures were given in plenum. These topics were then presented more in detail in the afternoon and discussed with the audience in round table sessions.The evening was dedicated to the Award ceremony. Lot of individuals and groups were allocated for their outstanding work.

On Saturday, 2nd December 16 workshop-sessions “Effective practices” were offered and the issues discussed in smaller groups. After lunch families with their children were invited to a festival with theater- and dance performances, different sport and fun activities for the children, like a mini-football training.

Downside Up invited a few DS experts from abroad to enrich the conference with their contributions.

Gert de Graaf from the Stichting Down Syndroom in the Netherlands presented his research work, which provided the basis for an overview of birth and population prevalence for Down Syndrome in Russia.

Amy Allison, a therapist from DS Guild of Greater Kansas City, USA presented a model on how to build a support network for individuals with DS.

Veronique Garrett, who with her daughter Florence were the instigators of the Downside Up Charitable Fund had a talk about how an active social life for people with special mental needs can be organized.

I was very honored to be one of the invited speakers. My topic was “Education in mainstream and special schools under the aspect of preparing for a job”.

One of the workshops on the saturday was given by Christel Manske, from Hamburg, Germany.

Every foreign speaker had its own personal interpreter, so was able to follow the lectures. In the weeks before the conference these interpreters had translated the presentations in Russian language. They also translated our talks for this very interested audience. Besides that they were always on our side and also helped us through the very challenging subway system in Moscow, so that we could not get lost.

The conference was very well organized. Lectures were short and to the point. Experts from different parts of Russia talked about: the situation of people with DS in Russia; perinatal support, effective models of Early Intervention; career guidance and employment; supported living, social orphanhood and other topics.

On the website of Downside Up you can find a detailed report about the conference (currently only available in Russian) as well as many photos of the event.