Besides the reports from the president and the treasurer, four associations had the opportunity to give a short overview of the situation of people with ds in their home country and to present a special project or campaign of their organization. 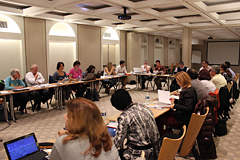 Bernadette Wieser from Austria talked about the DS-Center “LebenLachenLernen” and presented the Math-methode “Yes we can”.
Fernando Ferreira represented the portuguese Association APPT21. School coaching, the development of Apps to improve cognitive skills, the poster campaign “Accredita, eu consign” (Believe me, I can do it!) and the partnership in an european youth-project were the portuguese topics.
Lars Erik Brustad spoke about the good financial status of adults with ds in Norway on the one hand but f.i. the lack of work opportunities on the other hand.
Tibor Kiss comes from Budapest and founded the hungarian association 15 years ago. Mainstream integration with the international program “The bell rings for everyone” and “Art Integrate”: art from artists and persons with ds sold in an auction, were in focus of his talk.

Scientific issues were discussed. Frank Buckley gave an overview of the the trials with a new drug compound by Roche. The issue of the new prenatal bloodtests and EDSA’s position were discussed and it was decided that EDSA will set up guidelines for counsellors and publish it on the EDSA-website.
Jacqueline London described how she plans to set up the new EDSA-scientific committee. Tasks of the scientists and the organization of such a committee were discussed.

Fulya Ekmen informed how the turkish ds-association will organize the 10th european ds conference in Istanbul, october 2016. As this conference will be under EDSA patronage, program, speakers etc. will be coordinated with the support of some EDSA boardmembers.

Together decided the members on a common action for WDSD 2014. A delegation of persons with ds from the different countries will travel to Brussels to visit the Parliament and meet and discuss their needs with politicians.